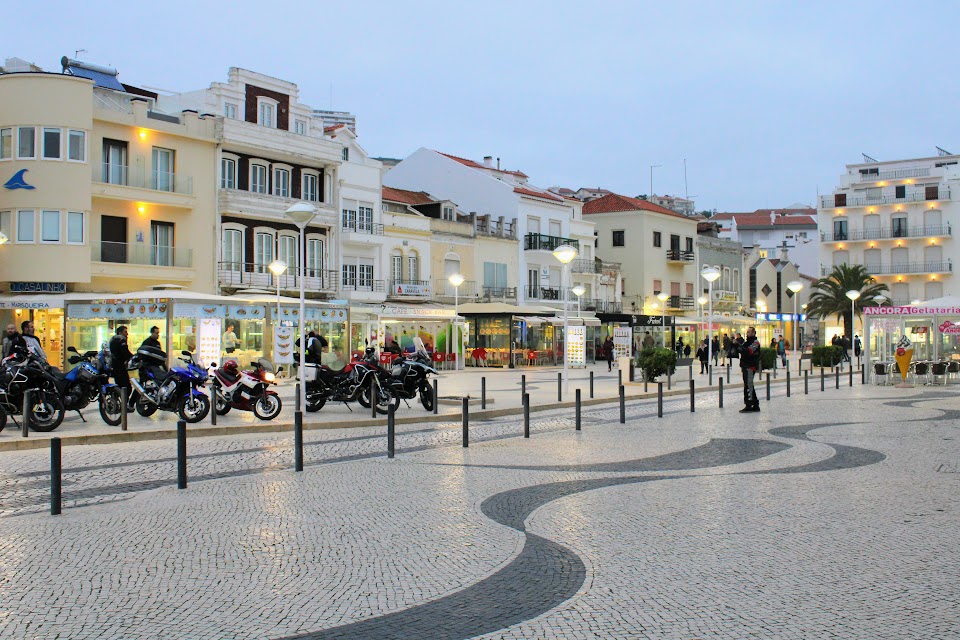 Once upon a time there was a nobleman who, while chasing a deer galloping his horse, saw a terrible chasm under him. Frightened begged the Virgin Mary to save him and, miraculously, the horse stopped so, as a token of gratitude, the nobleman decided to have a sanctuary built in that precise place in honor of his savior.
The episode is shown in images on mosaics that decorate the walls of the small sanctuary.
It was the year of 1182, the noble came from Porto de Mós and this would be the story of the origin of Nazaré.

What is irrefutable is that for many years the inhabitants of this town experienced fishing, before it became a tourist resort.
In the 60s, tourists has discovered the charm of this village and Nazaré begun to be known internationally. Visited every year by thousands of national and foreign tourists, Nazaré is today a modern and lively village. Walking through its narrow streets perpendicular to the sea, where surprises are hidden behind every corner, makes us rediscover a slow and authentic lifestyle.

Nazaré has gained world renown when the surfer Garrett McNamara has surfed a wave of 23.8 meters in 2011, entering the Guinness Book of Records as the largest surf wave in the world. After that, many surfers tried to break the record in the giant waves of Praia do Norte and more and more visitors are trying to observe the strength of Canhão (Cannon): the submarine gorge of tectonic origin responsible for the formation of these giant waves.

This small fishing village, with white houses scattered on steep slopes, surrounded by huge cliffs, has managed to keep many of its traditions; it is not difficult to cross with a fishermen dressed in checkered shirts and black trousers, or a women wearing the seven skirts, perhaps while performing some typical fishing activities such as repairing fishing nets or putting to dry the fish on the beach. 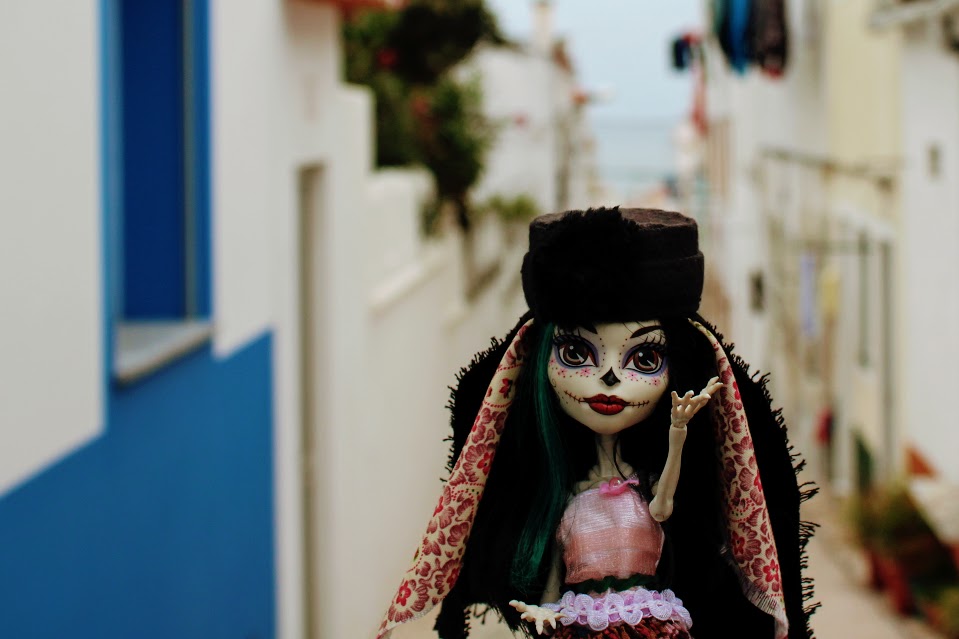 Me wearing the typical headdress from Nazarene women 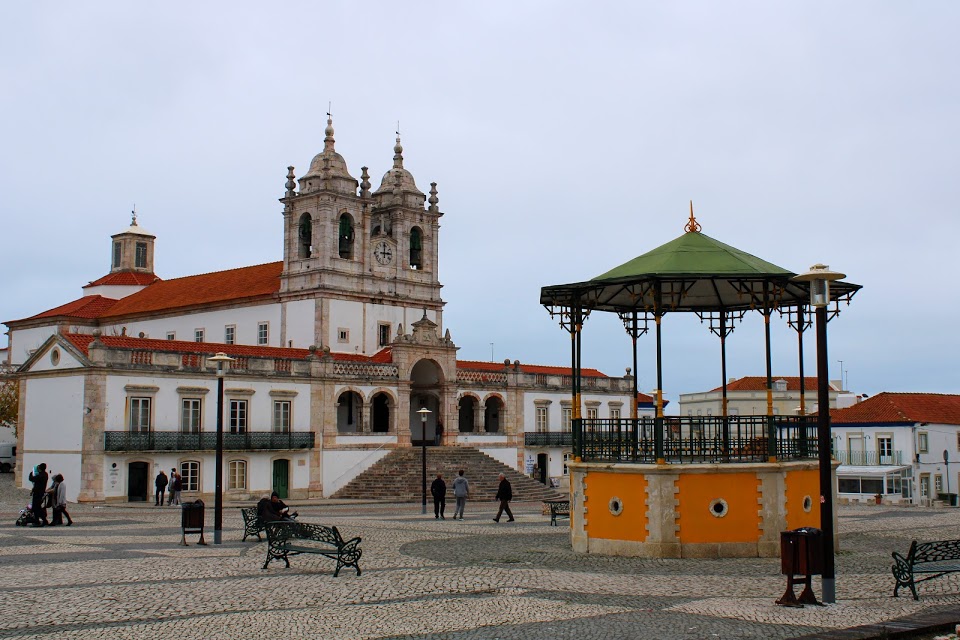 The Sítio da Nazaré is one of the main districts where the entire history of the city began. It stands on top of a mountain and is a place where pilgrimage and worship prevail, since it is there that Madonna of Nazaré, according to legend, appeared. It is possible to access the upper part of the village either by car or on foot – by a staircase – but I recommend the picturesque ascensor (funicular) that from Praia da Vila leads to the summit of the Sítio da Nazaré with some noteworthy places: Hermitage of Memory, the Sanctuary of Nossa Signora da Nazarè, the lookout point of the Suberco, the fort of São Miguel Arcanjo and, going down on the other side, the Praia do Norte (where there are the biggest waves and the championships are held of surf).

At the top we find the beautiful Rua do Horizonte’s belvedere. From here we have an incredible view of the beach and of Pederneira, on the oposite side of the beach, which during the 12th and 14th centuries was a seaport, with one of the most active shipyards of the Kingdom of Portugal. 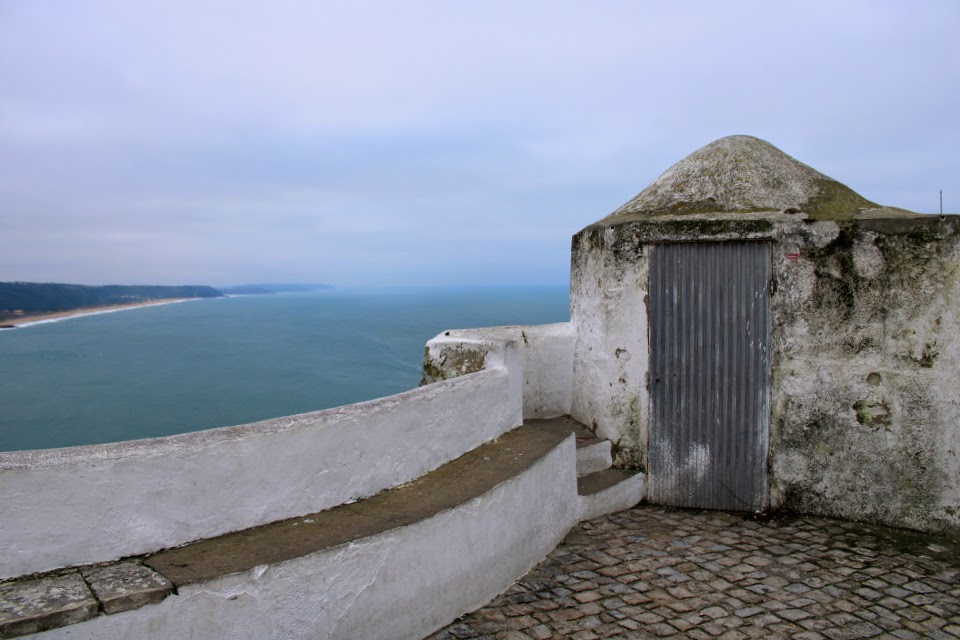 The Sanctuary of Nossa Senhora da Nazaré (Our Lady of Nazaré) is located in the main square of the Sítio da Nazaré. It is a very important temple, totally dedicated to the patron saint, the Saint of Nazareth. It’s there that a great party takes place in celebration of the day in which the saint supposedly appeared, 8 of September. This party is annual and lasts approximately 10 days. The church dates from the seventeenth century and was built by King Ferdinand in order to keep the image of the virgin after the increasing pilgrimage to the Chapel of Memory or Hermitage of Memory.

The small Chapel of Memory represents a great importance for the village of Nazaré, since it comes from the foundation of this fishing village. According to the legend, this chapel was built next to this great cliffs by order of Don Fuas Roupinho, warden of Porto de Mós, a neighboring village. Both its interior and the facade of the square chapel are decorated by the beautiful panel of blue and white tiles dated from the 17th and 18th centuries, where we can see allusions to the legend of Don Fuas Roupinho. 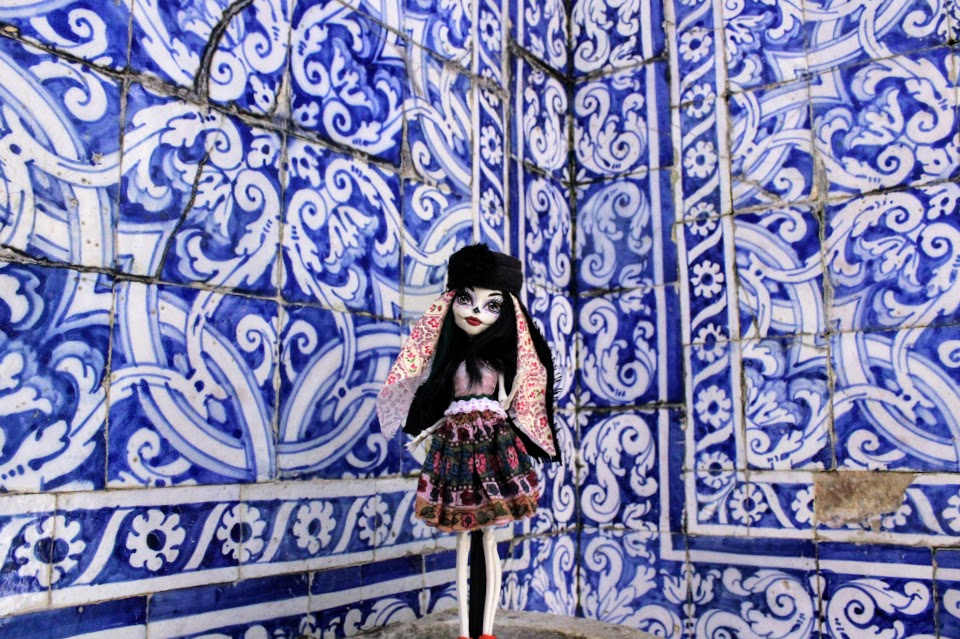 Next to the chapel, a monolith recalls the visit of Vasco da Gama, who asked the Virgin for luck on his dangerous journeys.

A few steps away from the Capela da Memoria is the Suberco lookout that, beeing 110 meters high, offers a breathtaking view of the sea.

From the Belvedere of the Suberco, going down on the right for the Estrada do Farol we arrive at the end of the rocky cliff where the fort of São Miguel Arcanjo is located. São Miguel Arcanjo fort is located on a rocky cliff, not far from Praia do Norte. The fortress was erected by King Don Sebastião in 1577 as a protection against attacks on the fishing population by Algerian, Moroccan and Norman pirates. The subsequent improvement and enlargement works were commissioned in the middle of the seventeenth century by King Don João IV. On the main portal there is an original relief with the image of St. Michael the Archangel, accompanied by the legend “Rei Dom João o Quarto – 1664”, to mark the date of these works.

This promontory offers excellent panoramic views: the Salgado beach to the east, the village of Nazaré to the north and the Praia do Norte to the west.

The entrance costs 1 euro and it’s worth it. Inside are exposed some of the champions surfboards. 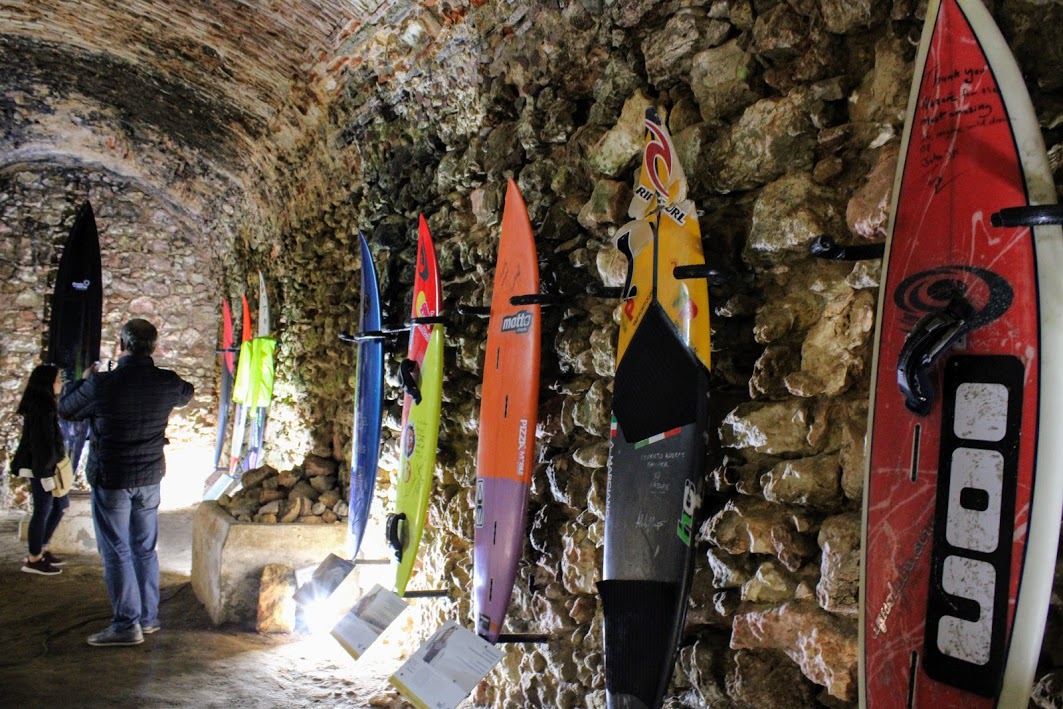 Located in Rua D. Fuas Roupinho 22, in the Sítio da Nazaré district, the Museu Dr. Joaquim Manso popularly known as Museu da Nazaré is a regional museum, where we can admire several permanent collections and some temporary exhibitions. A historical-cultural museum of the region focused on the culture of the sea. The millenary and historical testimonies of human presence on this coast, the history of the village and the cult of Our Lady of Nazaré, boats and fishing gear, work, festivals and traditional costumes, are themes that make up the exhibition path to the purpose of revealing the identity of the region and its intimate relationship with the ocean.

Known for its large, perfect and incredible waves, Praia do Norte is under the influence of the “Canhão da Nazaré” phenomenon. It is a rare geomorphological accident, the largest in Europe and one of the largest in the world, consisting of a fault on the continental plate about 170 kilometers long and five kilometers deep. The “Canhão da Nazaré” channels the swell of the Atlantic Ocean to Praia do Norte, practically without obstacles, providing the creation of waves with an unusual size compared to the rest of the Portuguese coast. A true playground for lovers of wave sports.
The time of the big waves is between October and March.

The natural Cave of the Forno de Orca is located in the Praia do Norte at the base of the promontory of the fort of São Miguel Arcanjo. Modeled in a limestone structure is evidence of the erosive activity of the time. During the low tide the cave is easily reachable contrary to when there is high tide and the strong waves are violently thrown against the cliff entering the cave. 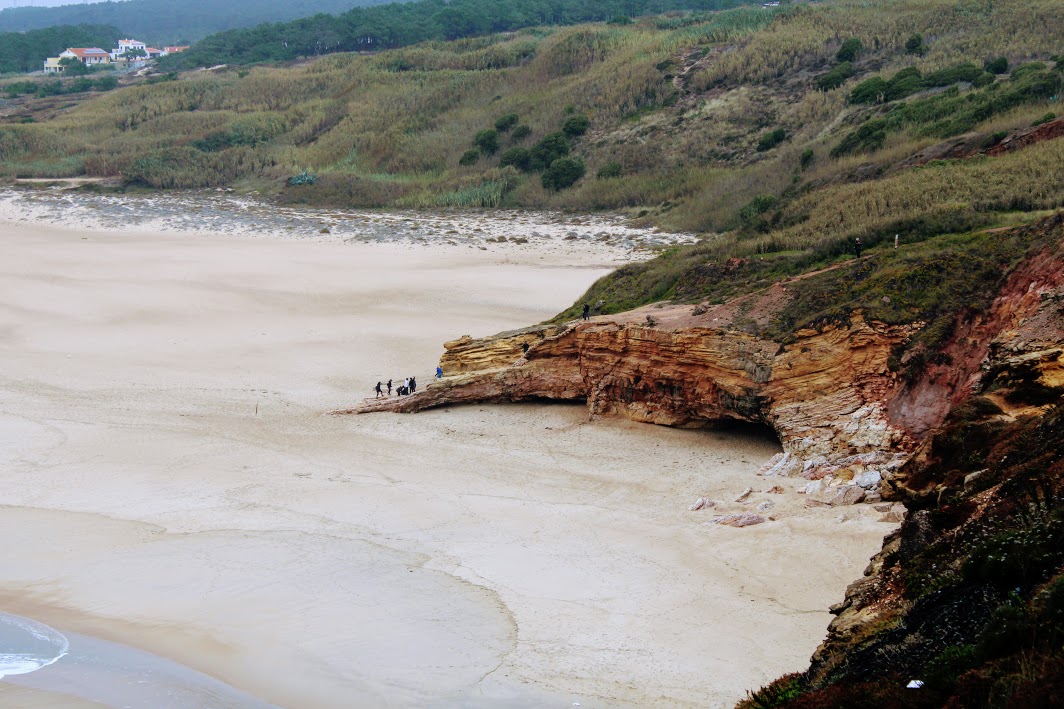 The first references to fishing in Nazaré date back to 1643, however, only at the beginning of the nineteenth century the population began to settle near the beach. Local fishermen lived mainly in the highlands – Sítio and Pederneira – due to the continuous attacks by pirates that made the beach insecure. It was only in the century. XIX, after the French invasions, that the necessary safety conditions were satisfied so that the fishermen would settle near the water.
The beach of the Vila is the most frequented by the local population, it is here that the women put the fish to dry and where it is possible to buy it. The seafront is the ideal place to walk and shop. 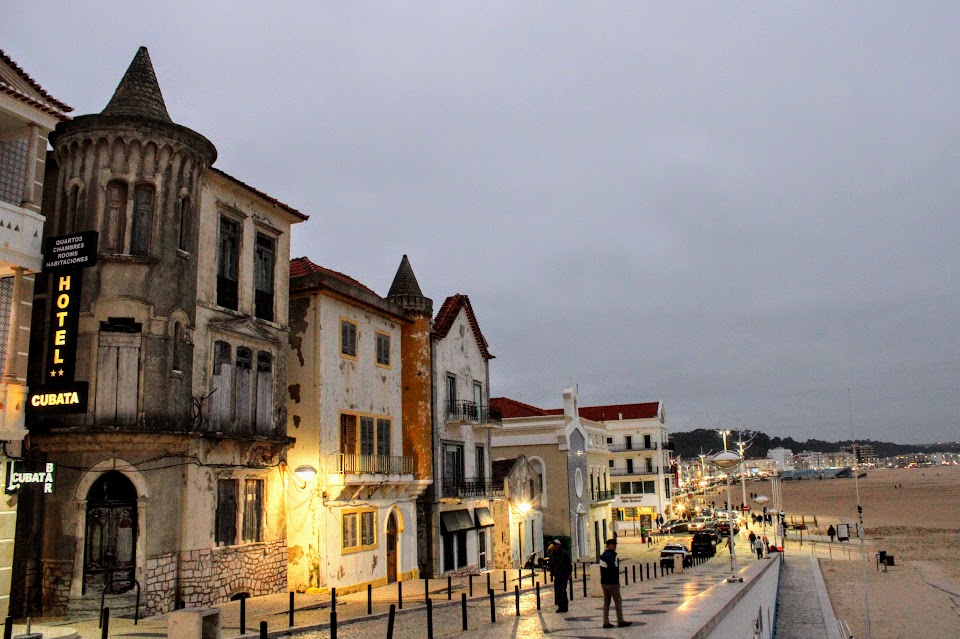 Another beautiful beach is Praia do Salgado. Stays south, away from the village center, we can get there by car, and there’s a free public parking lot, very close to the beach. Protected by Serra da Pescaria (to the north) and by the Serra dos Mangues (to the south), it’s the prefered destination by those who love tranquility. It is equally popular for those who practice adventure sports such as hang-gliding or paragliding because of its natural conditions. The quality of the waters of the beach of Salgado has obtained several awards “Golden Quality”, certified by the Environmentalist Association Quercus.
The beach has no lifeguards.

The Monument to the Woman of Nazaré is in the Largo dos Cedros of the tourist village of Nazaré this monument in honor of the Nazarene woman was created by Fernando Pedro and inaugurated in 1998. Fountain with iron sculpture that honors the Nazarene woman, always strong in character, hard worker and devoted to the village. While men ventured into the sea, the women remained on the beach, dedicating themselves to the sale and drying of the fish and, although diminished over time, this tradition is still active in the beaches of Nazaré. 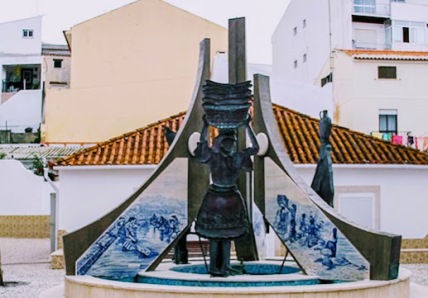 A curiosity about the typical clothing of the women of Nazaré are the Seven Saias. The seven skirts are part of the tradition, myth and legends of this land so closely linked to the sea. They say that they represent the seven virtues; the seven days of the week; the seven colors of the rainbow; the seven waves of the sea, among other biblical and magical attributions involving the number seven. The Nazarene having the habit of waiting long for their husbands and sons, from the return of fishing, on the beach, sitting on the sand, used the various skirts to cover themselves from the cold: the upper ones to protect the head and shoulders and the others to cover the legs, being always “composed”. 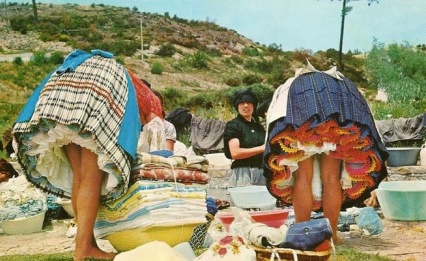 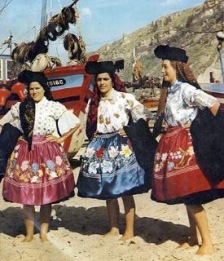 The small and cute Fisherman’s House Museum remains in Rua João Sousa Lobo 10B in the tourist village of Nazaré.
Inaugurated in 1999, it was created by the private initiative of a lover of the traditions of his native land.
Interior and exterior are the typical home of a family of fishermen and fish sellers between the 1930s and 1950s with home appliances and furniture of the era and some miniatures of old Nazaré boats.
Unfortunately I found it closed with the sign “for sale” …

It is located on Avenida da Republica da Nazaré, facing the sea.
Dedicated to the cult of Our Lady of the Afflicts, it was built in 1760, at the behest of the Cistercian monks of Alcobaça, and then received the tenth of the fish, as the fishermen refused to go to Pederneira to pay the tax.
On the door there was a crack and inside a nailed wooden box, where the devotees left their alms for the Saint
The facade is entirely covered with azulejos with white and blue motifs.

The chapel of Santo António is  located also on the Avenida da Republica da Nazaré promenade. It was built in 1861, with the money of the fishermen, who contributed to 1% of their profits as “money for the saint”. Its facade is completely covered with tiles. Its interior, with a single nave, covered by a wooden roof and on the walls decorated with azulejos with boiserie effect.
Inside the main chapel is the image of Sant’António. 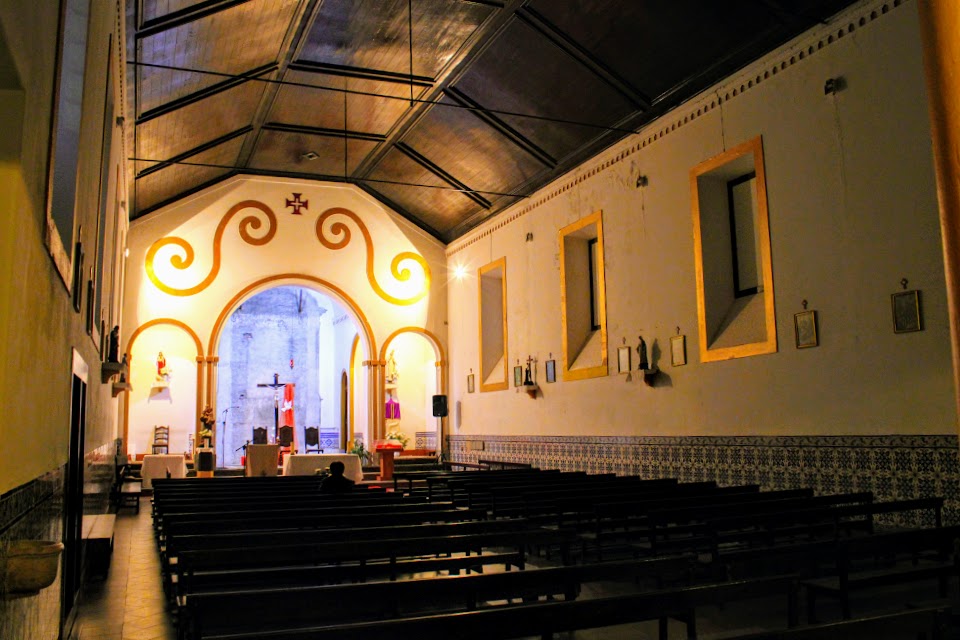 Although you eat divinely almost everywhere I recommend the family-run restaurant A Tasca by Miguel and his wife Adàlia: Miguel takes care of the tables while Adàlia is the queen of the stove. You will find abundant dishes of home cooking and, even if you drink some wine, you will still spend more than € 15.00.
The address: Rua 25 de Abril, 29 – Sìtio da Nazaré

If you have questions and suggestions, write me in the comments
Ciao from yours Crackita